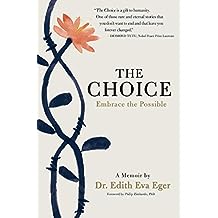 Ever since This Place Holds No Fear a few years ago, there has been a question that would come up for me every time the Holocaust was mentioned. What happened afterward? I mean, I live in the US and I know what happened here, but what about in Europe where the hate had built to that point and where people were released to try to live together again? Worse than that, the people who were forced to live under new oppressors? How did Germany build to what it is today? How did they recover? What happened under the Communist Block?

This book answers some of those questions for one woman and her family. Dr. Eger talks about not only her experience during the Holocaust, but afterward. She talks about the things she did to try to recover the life she was supposed to have, the things that worked, the ways that her life further derailed when she couldn’t deal with what happened. The magical thing about the book and Dr. Eger’s message is the way she talks not just about the long road to recovery but the downward spiral of not dealing with trauma, hard as it is to do. She reminds the reader that there are many kinds of prisons and many of them are in our own minds. She also talks about the guilt that we can carry when we make a decision that turns out poorly.

The books begins with her and her experience but with it, she carries the experiences of several of her patients. There were patients along the way that made her realize some of her own problems, some of the ways she wasn’t healing. It was also through speaking engagements throughout her career that Dr. Eger makes other breakthroughs on recovery and healing. The last one of the book is my favorite, as it brings so much full circle.

The thing that surprised me the most about the book, though, was the gumption and fortitude of Dr. Eger. The title foretells the parts of the book about healing and that she went through some trauma. The description adds in that she was a Holocaust survivor. However, this is not the story of a woman who was swept away in path of history. She may not have been openly defiant, but she is the kind of brave and strong that we typically tribute to pioneering women. She reaches for everything she decides she must have and some work out, and some don’t, but she reaches. The idea of being a survivor or a victim as a choice is a hard one, but I definitely see her point.

I listened to the audiobook from Scribd, as it was no available from my library, but click on the cover image to find places to obtain it from Booklikes or add to Goodreads for later.

This site uses Akismet to reduce spam. Learn how your comment data is processed.

Try Audible Premium Plus and Get Up to Two Free Audiobooks