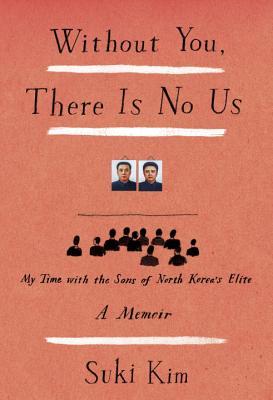 I have to admit that it was the title that got me to read this book. I had to know who “us” turned out to be. Finding out that it was based on lyrics about the leader of North Korea was disturbing. Without him, there is no North Korea. It’s strange to think about too, because the book is written during the time of Kim Jong-il and he is gone now. Still his son persists with his way of ruling the country and so the words hold true. Without a Great Leader, the country could be different.

We read and talk about a lot of dystopian futures but short of the actual Hunger Games every year, it sounds like they live in the districts of Panem. It’s especially crazy because they live in the capital and it still doesn’t sound any better than District 12. Okay, maybe District 2 where everything was still monitored and everyone still served President Snow but they mostly got to eat, if I remember the book right.

Granted, Without You, There Is No Us is written from a South Korean/American perspective but Kim is never hateful, mostly just sad for them. It’s easier, I think, to talk about youth in situations like this. I get, too, that teaching at a university was the best in that she had to really see North Korea, so she took what she got. It allowed her to be forgiving of their faults, but knowing that they would lead also messes with your head as the reader. I feel for their predicament but I’m no easier with the idea of them pointing nukes at my country, you know what I mean?

The book covers an array of ways that it is difficult to even be privileged in society there. As Kim says herself at her TED talk, it’s a prison masquerading as a country. For as much as I feel for them sometimes, they are also the privileged class and she mentions the state of other people she sees the few times she was outside of campus. Their lives aren’t easy, but they are fed, they are in school and not forced labor at construction sites. Despite that they seem to invoke a certain amount of denial about the benefits that all citizens have, I did appreciate the glimmers that they did seem to see. They aren’t blind, just so unable to change or even talk about what they see that there’s no point in dwelling on it.

I did love the parts where she had to explain capitalism or capitalist ideas to them. I have always enjoyed conversations where someone sheds light on how weird my own habits or beliefs are. That said, the fascination with Harry Potter was adorable. They’re college students but she painted them as so much more innocent than we’re used to, I think. For an idea of the book and her experience, here’s the TED talk that Suki Kim did following her experience. It captures the same heartbreak as the book.

I borrowed the book on Scribd but it’s also available in other ways. Check it out on Goodreads

This site uses Akismet to reduce spam. Learn how your comment data is processed.

Try Audible Premium Plus and Get Up to Two Free Audiobooks

Keep in mind that we may receive commissions when you click our links and make purchases. We make an effort to only provide links to genuinely recommended books and to provide as many options and such as are available to us.